‘Lunch with a LEO’ Promotes Positive Relationships Between Officers & Students 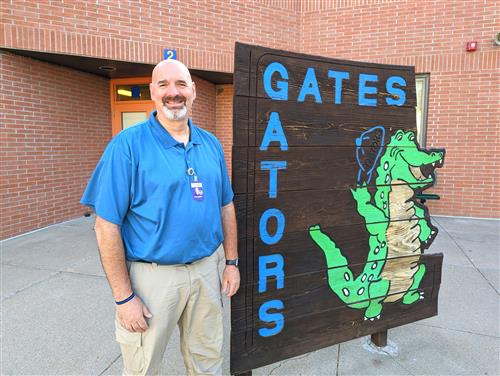 Grand Island Public Schools and the Grand Island Police Department are partnering on a new program for elementary students: Lunch with a LEO (law enforcement officer).

The concept of the program is that GIPD officers would adopt a GIPS elementary school where they would visit during the school day and visit with students. This ideally would happen during lunch time, but could also be during recess.

On the surface the program seems simple, but its potential impact is vast.

Wes Tjaden, Assistant School Safety Coordinator at GIPS, oversees the program. Tjaden, who started in this new role at GIPS this school year, is a former GIPD officer and school resource officer.

Tjaden joined GIPS in August, filling a newly added role in the district. Nearly three months deep into the job and he is already bringing new ideas and excitement to the district’s safety efforts.

He  said the Lunch with a LEO program will help familiarize young students with law enforcement officers, while also allowing the officers to familiarize themselves with the school and administration.

“The goal is to promote another layer of safe environments for students and staff at Grand Island Public Schools,” Tjaden said.

The first Lunch with a LEO kicked-off at Newell Elementary earlier this month (October 12th). Tjaden is excited to see the program grow throughout the school year.

As part of his new role at GIPS, Tjaden is the main liaison between GIPS and GIPD. He also conducts building safety audits & assessments, conducts investigations, provides safety presentations, and more.

Most recently, Tjaden was featured in a cover story for The Grand Island Independent highlighting his efforts for GIPS.

Tjaden spent nearly eight years as a school resource officer at Grand Island Senior High, and has seen the benefits of building relationships with students and staff from a law enforcement perspective. He said oftentimes a student’s only contact with a police officer is during a bad situation at home or during a traffic stop.

“This program gives both the Grand Island Police Department and the students in Grand Island Public Schools an opportunity to get to know each other in a safe, friendly atmosphere and help build a stronger community for all of us,” Tjaden said.

Due to a local police officer shortage, there is one less School Resource Officer to check on the elementary schools, meaning students would see less officer  presence. Lunch with a LEO will help address the positive police presence in GIPS elementary schools.

The program will also ensure GIPS compliance with Rule 10 which states:

“The school system’s safety and security plan(s) are reviewed annually by one or more persons not on the local school system safety committee and not an employee of the school system. This review will include a visit to school buildings to analyze plans, policies, procedures, and practices and provide recommendations. Any recommendations made as a result of the analysis are forwarded to the head administrator and to the school safety and security committee to be considered in making revisions to the plan."

In addition to the opportunities to build positive relationships with students, officers in the Lunch with a LEO program will check out different facets of the Emergency Operations Plan of the schools.  These include maps, posters, and written plans.  This will help educate the officers of procedures and act as a check and balance system.

The law enforcement officers will also talk to key staff members about the plans. This gives the officer a better understanding of what the response is by the school, which can open up discussions about the officer’s responsibility and actions during a critical incident.

Tjaden said the Lunch with a LEO program will offer students an opportunity to see police officers as humans whose main goal is to make the community a safer place.

We are excited to have Mr. Tjaden on the GIPS team!